John Francis Mayer was president of the ISPD between 1983 ad 1987, and a great contributor to the advance of haemodialysis and peritoneal dialysis. He directed several Nephrology divisions in universities such as the University of Missouri, the University of Connecticut, or the Uniformed Services University of the Health Sciences. His contribution to books and publications, and his education dedication and skills led to his work being recognised in different countries during his life. After his sudden death in 1990 the ISPD decided to recognise his legacy with the John Maher award, honouring young individuals who have contributed substantially to the field of peritoneal dialysis. Candidates must be younger than 45 years old and have demonstrated expertise in either the scientific, medical or nursing aspects of PD.

Dr Adrian Liew is the recipient of the 2020 ISPD Congress John Maher Award. His list of merits is explained below, in words of Dr Mayoor Prabhu.

Dr Liew is a Senior Consultant Nephrologist and Associate Professor of Medicine with the LKC School of Medicine at the Nanyang Technological University-Imperial College London in Singapore. Dr Liew has made far reaching contributions to PD, especially in the South East Asian Region. He was the founding Chief of Nephrology of the Department of Renal Medicine at Tan Tock Seng Hospital in Singapore and is the program director for the Chronic Peritoneal Dialysis program, and during his 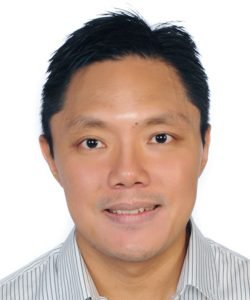 tenure as Chief of Nephrology, had developed various subspecialty programs in the department. It is notable that he had spearheaded several national programs in Singapore including the peritoneal dialysis preferred initiative and the national HALT-CKD program.

Dr Liew’s contribution towards the growth and promotion of PD in South East Asia is laudable, especially since this region is mainly a resource limited region grappling with an increasing CKD burden. He has brought together committed nephrologists from each member country of ASEAN in early 2017 to form the ASEAN PD Network which he continues to chair. Under his leadership, the 8 countries have developed the study design and concept for the PROMiSE Study (PD pRactices and Outcomes in Multiple SouthEast Asian Countries), a PD registry of incident PD patients in all 8 countries of Southeast Asia with the aim of reviewing differences in PD care and improving PD outcomes in the region. As part of the collaboration between ISN and the Indonesian Society of Nephrology (PERNEFRI), Dr Liew has helped develop the blueprint for expanding the utilization of peritoneal dialysis in Indonesia. He also is actively assisting units in Myanmar, Brunei, and the Philippines in improving outcomes and increasing utilization of PD. In addition, he has been heavily involved in the training of nephrologists to perform peritoneal dialysis catheter insertion in several Southeast Asian countries. Dr Liew is also an elected Executive and Secretary of the International Society for Peritoneal Dialysis (ISPD) and is the Co-Chair of the Local Organizing Committee for the ISPD Congress 2022 in Singapore.

This impressive PD curriculum, together with other contributions in other fields of nephrology, makes Dr Adrian Liew a worthy recipient of the John Maher Award, just like the illustrious predecessors who were bestowed this honour:

Dr Adrian Liew, as winner of the John Maher award 2020, will give a presentation at the opening plenary of the ISPD-EuroPD 2020 Congress in Glasgow next May. The title of this session will be: Peritoneal Dialysis in Southeast Asia – The Start of a PROMiSE

Dr Dimitrios Oreopoulos was a major force in the development of peritoneal dialysis, through his contributions in research, development of methodologies and techniques, and even founding the publication PD Bulletin, which led to Peritoneal Dialysis International, our Society journal. The ISPD honours him by recognising the lifetime PD achievements of one of its members (in terms of delivering care to patients, research, teaching and /or advocacy) with the Dimitrios Oreopoulos Award every two years, at our Congress.

Prof. Edwina E. Brown explains a few of the reasons why Prof Fred Finkelstein deserves the Oreopoulos award in 2020. 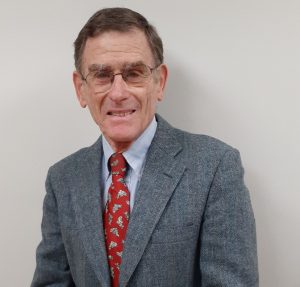 Fredric Finkelstein is Clinical Professor of Medicine, Yale University Medical School. He has been one of the key proponents of patient-centred care, the importance of considering patient reported outcomes and how to do this. His research work has highlighted the psychosocial problems experienced by many people with end-stage kidney disease and that these need to be addressed by dialysis programmes.

His greatest contribution to peritoneal dialysis has been the development of PD in lower income countries. He has worked extensively in low resource countries and was instrumental in setting up the Saving Young Lives Program enabling PD for AKI (currently the deputy-chair); was chair of the Peritoneal Dialysis Committee, International Society of Nephrology 2006-2009, co-chair of the dialysis committee of the ISN, chair of CME programs for ISN (2009-17), co-chair of the North American Chapter of ISPD 2008-11, chair of the international liaison committee of the ISPD 2006-19 and is currently on the steering committee of the ISN ESKD initiative, which is promoting PD as the most cost-effective way of increasing access to dialysis in low resource countries.

He has been involved in many international guidelines, most recently in the development of the 2020 ISPD clinical recommendations for prescribing high quality goal-oriented PD. The PD community in its broadest sense – people with ESKD and the PD healthcare team – have benefited immensely from Fred’s extraordinary amount of energy and devotion.

The International Society for Peritoneal Dialysis (ISPD) welcomes research proposals that are of importance to the international peritoneal dialysis community. The study should require international collaboration.

Eligibility Criteria
Members and non-members of the ISPD may submit proposals.

Applicants are encouraged to discuss the proposal informally with Dr Thyago Proenca De Moraes, Chair of the ISPD International Studies Committee, by emailing admin@ispd.org before finalising and submitting the application.

Finalised applications should be submitted to admin@ispd.org by February 3 2020.

Funding
Small grants (up to $10,000 USD) may be awarded at the discretion of the ISPD Council to help enable these projects.

Click here to read Prof Johnson’s message to the members of the society, and learn more about what’s happening at the society. 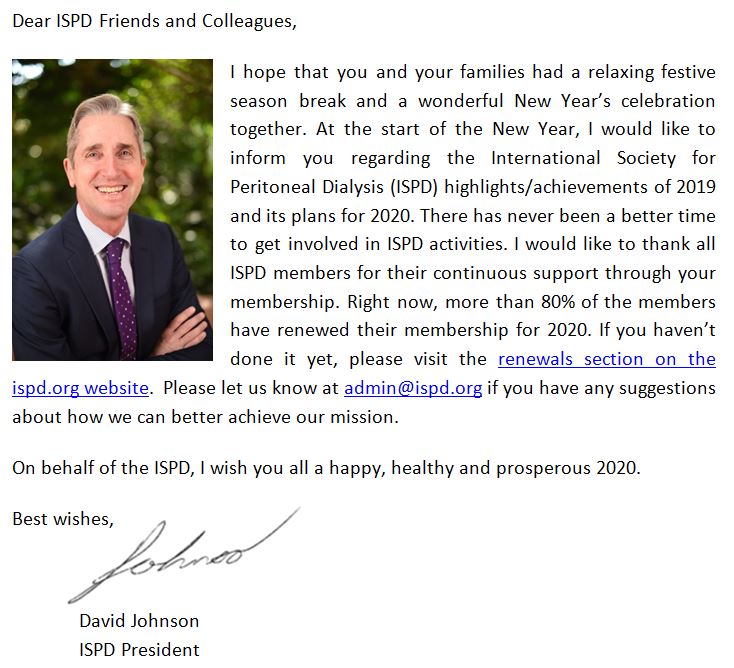 The International Society for Peritoneal Dialysis (ISPD) welcomes research proposals that are of importance to the international peritoneal dialysis community. The study should require international collaboration.

Eligibility Criteria
Members and non-members of the ISPD may submit proposals.

Applicants are encouraged to discuss the proposal informally with Dr Thyago Proenca De Moraes, Chair of the ISPD International Studies Committee, by emailing admin@ispd.org before finalising and submitting the application.

Finalised applications should be submitted to admin@ispd.org by January 15th 2020.

Funding
Small grants (up to $10,000 USD) may be awarded at the discretion of the ISPD Council to help enable these projects.

The ISPD is pleased to announce the second round of the ISPD Fellowship Program for 2019 is now open. The deadline to submit applications is 30th September, 2019.

Do you want to know how this experience can be? Read this article about two ISPD fellows from Nigeria getting trained in Colorado.

Click here to view full details about the program, the eligibility, and the application process.

Two ISPD Fellows from Nigeria share their experiences in Colorado

Ms. Obayori Christianah Olufunke says about her Fellowship at Anschutz Medical Campus Aurora, Colorado (USA) between October and December, 2018: “My fellowship began with the mandatory HR Dept formalities and ID printing, followed by an orientation to the Dept in person by Prof Isaac Teitelbaum. I was given opportunities to attend Renal Clinics (out-patients) along with the concerned consultants”

During this training, she was  given the opportunity to have surgical experiences in the following procedures at the operating theatre:

The majority of the days were basically on demonstration/teachings on PD procedures:

The later days of the training was concluded on festive note where she and her colleague had dinner and Christmas party with both the Coordinator and the entire dialysis team.

After completing this fellowship, Ms Obayori Christianah Olufunke hopes to establish a PD unit in Nigeria  with the following goals:

They also hope to partner with the University of Colorado towards this goal, which would be a wonderful culmination of this ISPD fellowship! 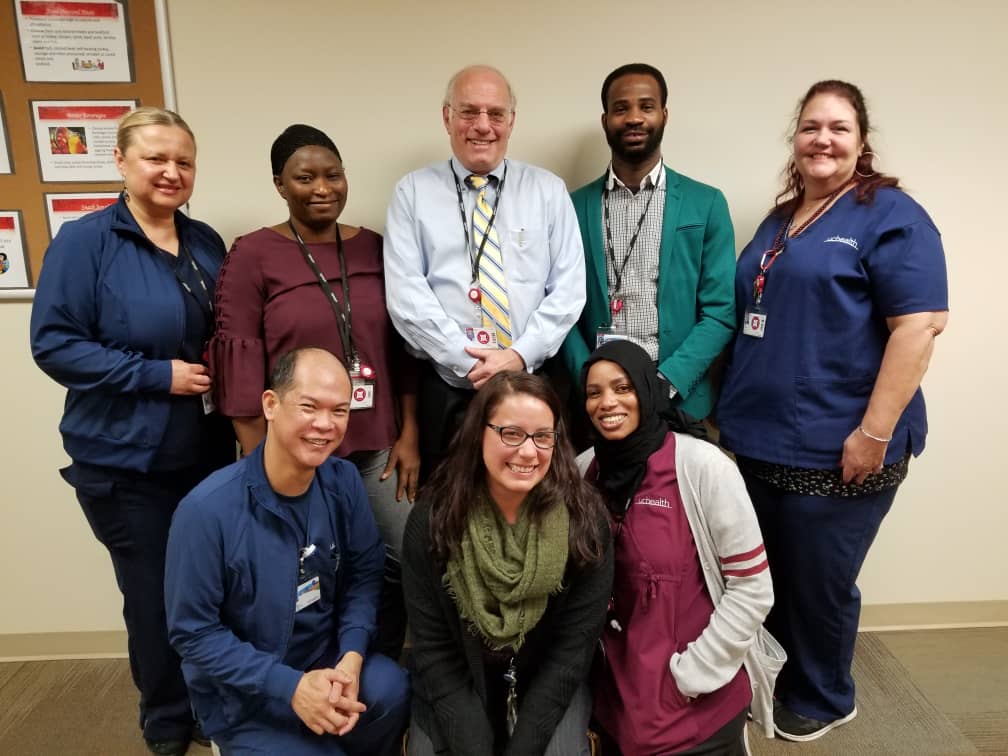 Ms Obayori Christianah Olufunke and Mr Oguntade Banjo Hameed,
with the staff of the Universtity of Colorado Anschutz Medical Campus in Denver

“I’d applied for this training under the supervision of Prof Isaac Teitelbaum at the University of Colorado Anschutz Medical Campus, Denver. Colorado, United State of America. Prof Isaac is a wonderful man and an amazing teacher. He assumed his supervisory role long before I arrived in America as he was helpful all through the form filling periods and visa processes”

Mr Hameed was in Colorado for 3 months commencing October 2018. He is happy to have learnt the basics of PD, catheter insertion, patient training and management of complications on PD.

On his return, a PD team has been constituted and preparations to offer PD as a therapy to patients is being done in right earnest.

Launching the process to elect next ISPD leaders

The Nominating Committee, chaired by Prof Joanne Bargman is starting the process to elect the next team of ISPD Officers, Council Members, Chapter and Committee Chairs/Members.

The positions that will be open for election (with terms) are:

If any ISPD member wishes to present their candidature, and/or nominate someone else for one of the positions, please kindly send an email to Prof Joanne Bargman (through the ISPD Secretariat) before August 4 2019. Elections will take place in the first quarter of 2020.

Increasing the voice of nurses in our Society

The Nursing Liaison Committee (NLC) is now chaired by Ms Helen Hurst and has been in regular contact via teleconferencing to make plans and develop a strategy for the nurse liaison committee. Three of the members are now on the Programme Committee for ISPD 2020 and are looking forward to help deliver an exciting programme. The group regular produce replies as a collaborative to ‘ask the expert questions’ posed on the ISPD website. We have been allocated funding to use within the committee to support nurses to attend conferences and in particular to attend the Council meetings. The committee are contacted regularly by International nurses for advice and signposting, the group can offer support to nurses globally with an interest in PD. Members of the committee are also actively involved in many other initiatives connected to ISPD including guideline development and publications.

We are keen to work more closely with the other committees and will endeavour to contribute to ISPD over the coming years to acknowledge and grow the nursing voice within the ISPD Council.